skip to main | skip to sidebar

Artest's Bio [or from Computers to Pewter]

Who would have "thunk" it, that a high tech computer engineer would wind up on Cape Cod re-incarnated as a "Pewter Smith". Often at shows or at stores, I'm introduced as "the artist" and I often look over my shoulder to see if there's a real artist standing behind me, of course then I say "Oh yeah I'm the artist", but I'm actually thinking "no I'm an engineer". I guess old habits die hard.

However there is some truth to it [that I'm an engineer], there is some engineering involved in doing this, it's not exactly high technology, it's the combination of a recent technological breakthrough [1970s] - RTV Silicon Rubber, an ancient technology[1940s] - Rubber Mold Spin Casting, and the desire on my part to find something to do on the outer arm of Cape Cod [not to much demand out here for Electrical Engineers].

There were a number of accidents, discoveries, lucky breaks and circumstances that led to this "who would have thunk it" second carer.

Starting in 1998 I became involved in the development of what I would like to refer to as the "Chip From Hell", it was an integrated circuit composed of about 4 million transistors that was the heart and soul of a new IP [Internet Protocol] based phone system. By this time 1998 things were no longer built and tested in a laboratory, they were simulated on a computer. As a result I was spending about ten hours a day chained to a computer. To break the monotony, or maintain my sanity, I took a trip to Wellfleet one weekend where I had a partially constructed house. But instead of doing carpentry I went to Lacount Hallow beach where there were huge clay cliffs that were being eroded by the ocean, or should I say being carved into interesting shapes by the ocean. I think the carving that was being done by the ocean was inspirational, several large chunks of clay were brought back to my house and carved into various shapes, one of these was fired in my kiln. From here the thought occurred "could the shape of this be captures in a mold and cast in some metal. This was spark that began the transition form computers to pewter. This was in January of the year 2000. 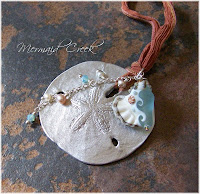 There were a number of things [back around 2000] that were great about experimenting with casting pewter, these were [and still are]:

1- Requires no massive computer simulations
2- You can touch it, feel it and even smell it
3- You can show somebody and their eyes don't just glaze over
4- The advantage of rubber molds [could write a whole book on this].

The principal accidents, discoveries, mistakes and luck that got me to where I am are:

1- The Odessa Chip [you know the IP Phone Chip With a Russian project leader]
2- A Studio rented in Sterling Mass to investigate casting methods
3- Coming to Wellfleet in 2001 to finish building my house.
4- Realizing that I either had to be a Carpenter, Engineer or find something else to do.
5- The Key Chain Series, especially the W Key chain
6- The fact that they wouldn't sell my W Key chain at the Wellfleet Pier
7- Building a spin caster to build the Royal Strike
8- Picking up oysters on Black Fish Creek and throwing them into my spin caster
9- The accident with RTV experiments that led to the fist H-crab castings
10- The realization that great detail can be "picked up" up using RTV and gravity pour
11- The drowning of a [dead] greed crab in RTV and subsequent surgical technique.
12- The ability to do thin shells
13- Is an unlucky number don't go there.

OK this about sums it up, so now I'm a pewter smith. [end of story]

This is a nice picture of "Mother and Child" horseshoe crabs 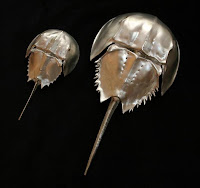 This little piece [below] was put up on my Wholesale Crafts web page back in 2006, it could be greatly expand, i.e needs work

I started working in pewter in 2000 and made things like candle stick holders and castings of sculptures done in clay. After moving to Cape Cod I tried using RTV Silicon Rubber to take an impression of an Oyster Shell. From this I made the "Wellfleet Oyster Key chain" which got rave reviews from all my friends. Then in the summer of 2005 I took an impression of a young horseshoe crab and did castings using the gravity pour method. I started selling these in shops on the outer cape and couldn't keep up with the demand. So by a stroke of luck I discovered that people really like pewter castings taken from the actual "sea creature". I plan to continue to use this method and add more creatures to my product family.

This is a picture [below] of my home made spin casting machine. There's lots of pewter splattered on the wall, which happens sometimes when "experiments go a-wire". I always stand 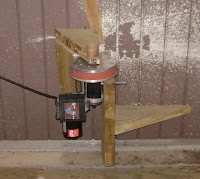 behind a piece of plywood to avoid getting hit with flying molten pewter. The next picture is just a different view which shows that the splatter isn't limited to just one wall.

This picture [below] showers the detail that is possible to achieve with the technique of using silicon rubber to take impressions of things that mother nature creates. 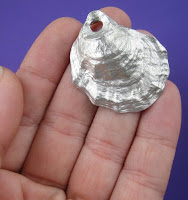 Jeff [below] at the Truro Treasure's craft show in Truro, Massachusetts [summer of 2007] 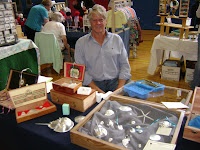 In my living room. 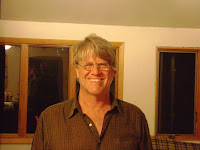 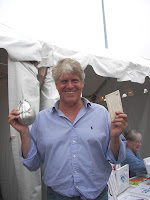 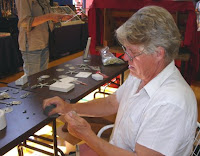 Posted by drummercove at 2:42 PM